At the last update on the status of the Travelogue promo video I said I’d stumbled across another filmmaker. A nice bloke called Miguel from Portugal who’s studying film at Oxford Brookes University and, it seems, he’s come up trumps.

Oh, hang on, we used to play trumps when we were kids but that phrase has sort of gained new, less positive, potential meanings.

So, on Sunday, with R2D2 in tow, I took a trip to Oxford, having arranged to hire a room, at a very reasonable price, in the excellent Rose Hill Community Centre. (R2D2 insisted on coming along. He’s got very clingy lately since I forgot to take him with me for lunch on Friday, although that might have something to with me locking him out in the garden after the sulking incident when I got back.) The room was about as close to being like a TV studio as you might imagine. On the way there Miguel suggested that we pop by Film Oxford to pick up some proper studio lights, which impressed me greatly.

On arrival at the community centre we found a nice, large room with huge windows and fantastic light. However, Miguel was switched on enough to know that the light on the overcast day wouldn’t last and promptly set about creating a TV studio out of all the equipment he’d squeezed into the back of The Truck.

He had the most spectacular camera I’ve ever seen, a huge black beast of a camera in an even huger black beast of a case the size of a suitcase. The previous filmmakers had only got digital SLRs, which had impressed me at the time but this kit was of a different order.

So, after a bit of fuss from R2D2, who demanded to have a good look at all the equipment, presumably to see if there was anything in there that he and C3PO could steal to use for their techno parties, we got down to recording. (Honestly that C3PO is a terrible influence on him, you know C3PO is code for Cl3Ptomaniac? He stole that silver leg and that red arm!) Fortunately, R2D2 behaved himself for the rest of the afternoon and we managed to get some good footage. As usual I struggled with my script, based on the text from the page about the Travelogue, but Miguel was patience personified and we got through it. 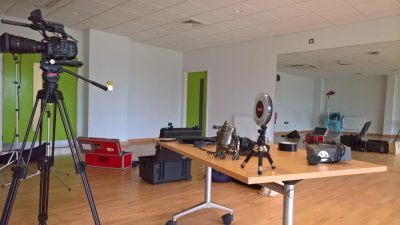 So, I’m hoping that, with a little bit of clever editing and perhaps some strategically placed fill-in footage and the odd still, plus the excellent animation produced by Hidden Design, we should end up with a pretty good video.

As usual, watch this space, and keep your cynicism generators at minimum. I’ve got a good feeling about this one.